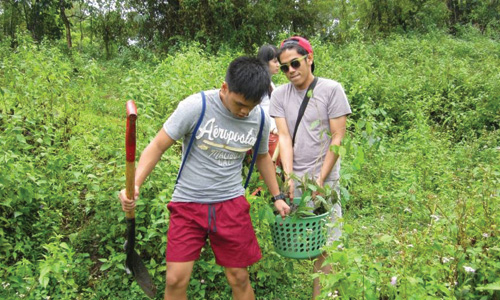 Project organizer Malu Gacuma said the event was in partnership with the Philippine Dental Association, through its Manila and Negros Occidental chapters, the Int'l Order of deMolay-Serafin V. Aguilar Chapter, La Salle High School Batch ‘81, and the Kanlaon Masonic Lodge No. 64.

Other project partners were the Alangilan Barangay Council, Department of Education District III, volunteers Jojo and John Vincent Bonnin of the Negros Mountaineering Club, and the Green Alert-Negros, led by coordinator RJ Rojo.

ESP founding president Antonio Claparols said “a forest, with all its biodiversity, keeps the planet alive for us all. If we lose our forests, then there is no point in negotiating a good agreement to combat climate change. Climate change is a global war that must be fought and won. Let us survive in a healthy environment.”

The tree planting was followed by an outreach program held at the nearby Alberto D. Arceo Sr. Elementary School. Spearheaded by the PDA, hundreds of less-privileged children were given hygiene kits, each containing a toothbrush, sachets of toothpaste, combs and towellettes, and taught how to brush their teeth properly, the press release said.