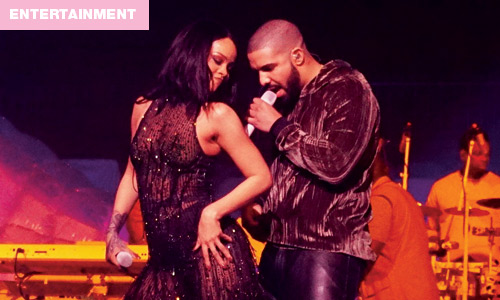 The two stars have been teasing us — and each other — for 7 years!

Drake and Rihanna have been in and out of each other’s orbits for years, but their encounter on the 2016 VMAs stage was in a league of its own. After years of teasing fans about their close relationship, the two collaborators are "definitely a couple," a source close to Rihanna told E!.

"They are fully dating," the source says. "No one really knows how long they have been 'official' -- they just decided to let it become a thing instead of hiding it from everyone. They're happy."

During the 2016 VMA’s, Drake kicked off his speech by detailing the first time he met "Robyn Fenty" — Rihanna’s real name — and proceeded to gush over the accomplishments of "the iconic being that is Rihanna." Meanwhile, Rihanna stood off to the side in her stunning gown, smiling patiently but warmly.

After declaring his love for the Barbadian singer during the VMA’s, an eyewitness reported that the pair went on a dinner date and Rihanna stayed at Drake’s hotel overnight. The pair then went on to spend plenty of quality time the next morning as they were seen flying together to Miami Florida.