Artist of the Week: Bruno Mars 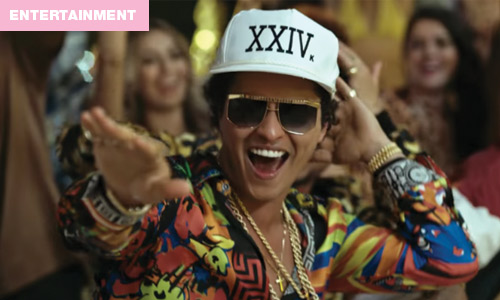 Last week Bruno Mars dropped his 2016 single, 24K Magic. Here’s a look back at how this pop singer went from romantically adorable in Just the Way You Are to intimidatingly cool in 24K Magic.
{youtube}8PTDv_szmL0{/youtube}
Where were you in 2010? Six years ago I remember hearing B.o.B.’s Nothin On You for the first time. It was one of the best pop songs of the year, not just because Bruno Mars’ vocal performance was great in it, but because it was a really neatly produced song. It even received three Grammy nominations including Record of the Year.

The song was written by B.o.B. and a Peter Hernandez, now commonly known as Bruno Mars. Back in the late 2000’s and early 2010’s, Bruno was a ghost writer, writing songs for the likes of Cee Lo Green, Mike Posner, Travie McCoy, Flo Rida, and a lot more.
{youtube}CAV0XrbEwNc{/youtube}
Bruno used that momentum to launch a solo career, quickly becoming the first male vocalist in two decades to crack the Top Ten with his first four singles. He began issuing his own material, starting with the May 2010 release of his first EP, It's Better If You Don't Understand. Doo-Wops & Hooligans, Bruno's full-length debut, appeared later that year and quickly produced a number one single, Just the Way You Are.
{youtube}LjhCEhWiKXk{/youtube}

{youtube}e-fA-gBCkj0{/youtube}
And then in 2012, the genre-jumping effort Unorthodox Jukebox was released. It featured the lead-off single Locked Out of Heaven, the song and album reached number one on several charts. All that success made Bruno a natural for one of the world's most prestigious gigs, the halftime show for Super Bowl XLVIII in February 2014, where he performed with Red Hot Chili Peppers as a musical guest and drew record ratings.

But the most surprising of his pop releases was probably Treasure, a retro disco tune that melted the internet and gave all music fans an eargasm. 2013 marked the year where disco came back, thanks to Bruno Mars and other nu disco artists like Skream, Daft Punk, and Shook.
{youtube}nPvuNsRccVw{/youtube}
The next year, Bruno Mars teamed up with another artist who loves the retro sound, Mark Ronson. The two artists collaborated in the 70’s funk-inspired Uptown Funk. And now just last week Bruno released his own modern throwback-inspired track 24K Magic.