The Ultimate Font Finder Has Been Released!

Comic Sans or Helvetica? Now you'll never have to question which is which ever again!

I studied Fine Arts back in college and I can't tell you how this would have been a great help to those who most especially want to pursue graphic or typography design. 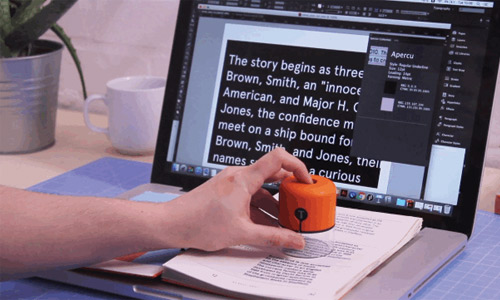 According to a report by Paste Magazine, the device's name is Spector, and he's set to become a font-lover’s new best friend. While only a prototype right now, the pocket-sized device is designed to take photos of text or script and cross-reference them within a comprehensive font database, allowing users to find an exact match to the font they’re looking for or at least the next best thing. The gadget also functions as a real-life eyedropper tool (Photoshop users understand this) which makes it able to identify any color’s RGB and CMYK values and allow artists to replicate the hue exactly. There are myriad other cool uses that a device like this could potentially facilitate, including replicating handwriting and turning it into a font, and other such possibilities.

Firstly, this will greatly benefit those who are in the design and printing business as this saves time for looking for the exact font as this can sometimes take few hours of a working day. According to other reports, Spector would allow designers to place Spector over the text they wish to replicate, from which the gadget would automatically connect to Adobe InDesign and transform the font on-screen to match.

The drawback? Spector can only identify four types of fonts at the moment as it is in its development stage. Once integrated with a much larger font database, Spector will be able to work in much the way that its inventors intended, and has a number of other potential consequences, including increased publicity for obscure, lesser-known font designers. But hey, it's nifty, smart and saves time so those in the industry will definitely benefit from this!

To view a video demo on the device, visit fionaoleary.ie.