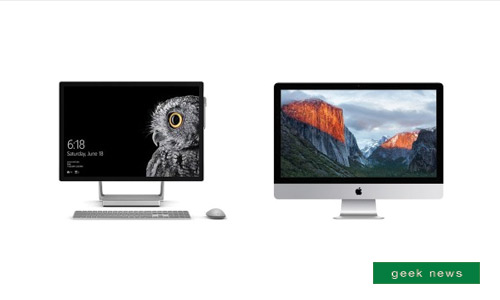 This time the comparison is strikingly obvious.

Apple's iMac has been known to be the desktop powerhouse for sometime now and with Microsoft releasing the Surface Studio, tech experts have been talking. It's obviously a blow against the iMac so let's compare the specs between the two:

When it comes to function and design, the Surface Studio is a step ahead with its thinness and flexibility. Meanwhile, Apple's iMac has been with us for many years and falls short on what designing professionals seek from the Surface Studio. But for some reason though, Microsoft's release looks strikingly similar to the iMac.

Both are a close call when it comes to display. The Surface Studio offers a 28-inch display, so it's slightly larger than the 27-inch iMac, but the aspect is different. Microsoft opts for a 3:2 aspect, whereas the iMac is 16:9, more like the usual TV or laptop screen. When it comes to display, Surface Studio offers 4500 x 3000 pixels on its PixelSense display, resulting in 193 pixels per inch. The iMac has 5120 x 2880 pixels on its Retina display, for 217 pixels per inch. With regards to display functionality, the Surface Studio takes it up a notch with the 10-point touch.

According to tech reviewers, this is where the biggest hardware difference lies, with each turning a different direction for graphics handling. The iMac offers AMD Radeon R9 GPUs (M380, M390, M395) with 2GB GDDR5 memory, stepping up to the M395X with 4GB GDDR5 RAM at the top level- making it offer more flexibility compared to Microsoft's release. The Surface Studio counters with Nvidia GeForce GTX 965M (2GB GDDR5) or GTX 980M (4GB GDDR5) GPUs.

Both devices come with a Bluetooth keyboard and mouse. The connectivity of both devices are similar, both offering Wi-Fi and Bluetooth support.

After reading a bit about the Surface Studio, its best fit for design professionals and architects because of its function and flexibility. This is the reason why it offers almost twice as much as what you'd spend over an iMac. Studio is about touch interaction rather than just the pure hardware so it depends on your needs from a device's functionality. If you think paying separate fees for the Surface Dial or Surface Book can work well with your productivity, you'll know which device to invest in.