I sat down with Jiggy Jr to do a quick interview for his Y101TALKS feature. I asked him about his favorite rain songs, and I got more than what I bargained for. 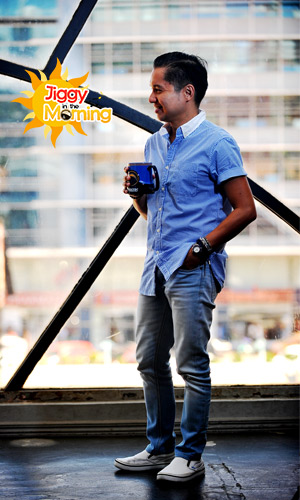 Often times the rain can be very depressing. Some people feel down because of the rain and it can sometimes dampen the mood. However, some people just simply adore the dark clouds and the sound of rain falling to the ground. Like Jiggy Jr, some can find beauty in the rain and embrace the warmth of the cold it brings.

So I asked Jiggy to name a few of his favorite “rain” songs; songs that were written for the seemingly gloomy weather. Despite the somber appearance, the rain has always inspired countless musicians to write songs about its allure. Here are some of Jiggy’s picks.

Phil Collins – “I Wish it Would Rain Down”

Although this break-up song sounds melancholic, Jiggy quite enjoys it, especially the drums. The morning host explained that sometimes he just wants the rain to pour down on him. The Pink Floyd-sounding “rain” song is accompanied by a music video that will surely make anyone smile. The video features a funny opening bit with a tongue-in-cheek Eric Clapton clarifying that Collins used to be the drummer in a really good band (Genesis) and when the singer (Peter Gabriel) left, he took over.

First of all, I had no idea that this Cebuano band existed. Thanks to Jiggy I now have a new awesome band to get obsessed about! Anyway, this 80’s local band released a new wave Psychedelic Furs-inspired song that is basically about “a cry for help”, (which is also awesomely in line with the themes 80’s new wave bands like The Cure and The Wake like to sing about). Jiggy Jr explains that the song Rain may be a negative song lyrically, but for his money, it's a melodically positive song. There are some songs that are really meant to be downers, you have to listen to some of them. They can provides a kind of cathartic release from your sorrows as these songs will express more than what you feel.

Nelson – “After the Rain”

This 80’s glam rock number by the Nelson twins contains the lyrics “come on and take my hand and I’ll pull you through”. This positive message permeates through the airwaves as it is also the same thing Jiggy Jr tries to communicate to his listeners to keep them from feeling down. The music video to the song, in true cheesy but cool 80’s fashion, starts with a teenage kid getting yelled at by his dad. “You’ll never amount to anything!”, the dad shouts at the kid who is crying in his bed. He puts on his headphones and the song starts to play. The Nelson twins then came out from a poster and took the kid to see their concert!

Gene Kelly – “Singing in the Rain”

You can’t deny that these two generationally separate songs will not fail to make you smile. Jiggy says that you just can’t sing these songs and not feel good. He compared the positive feeling to Bob Marley’s Three Little Birds. These songs are just meant to make the listeners feel happy. Just like what Jiggy said “You just can’t help but feel good when you hear these positively sunny-sounding songs”

Jiggy Jr is just like any other regular human being. In spite of what we know about him through his persona on the radio, Jiggy Jr can sometimes feel down or melancholic just like any regular person would. So what does he do stay positive? He listens to those rain songs exactly as it was arranged.

Jiggy had read a book called “Musicology” by David Beard. It’s a reference guide book for people trying to learn musicology. Our morning radio host learned from his reading that you can uplift your mood by using the power of music. The formula is that you listen to a song that best fits your mood in the present situation. Let’s say you’re feeling down because of the rain, so you play something like “Raindrops Keep Falling on My Head”. After you’ve embraced your sadness, then you play a brighter song like “Singin in the Rain” to uplift the mood. That is how Jiggy stays positive every time he feels down.

“Life is about contrasts”, Jiggy Jr said “To enjoy the sunshine, you’ve got to embrace the rain. Cause after all the downpour, the clouds will scatter and the sun will come out. The sunshine will be so much more beautiful if you experience some sort of rain in your life”.

So you’ve got to remember that after the rain is a rainbow! There’s more of those powerful positive things during Jiggy’s morning show Jiggy in the Morning. Catch him the moment you wake up, only here at Y101, Always First.