A witty entertainer, a comedian, a boxing enthusiast, a luminary at best; John M of the Afternoon Drive is an artiste who deserves a break! Happy Birthday to you John M! 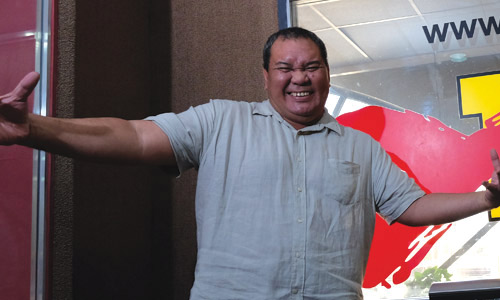 Yesterday Mike Solo went on board the Afternoon Drive to fill in for John M, who most likely left to have an early birthday vacation! I’m not really sure what he did to celebrate it, but I’ll assume that it was pretty classy as hell. Maybe we’ll find out later during his program when he comes back and tells you, but I’ll just throw in my wildest guess for good fun.

Knowing the big Kahuna for a considerable amount of time, my guess is that he probably went off somewhere to a beach paradise enjoying a glass of Piña colada and listening to his jazz favorites Chick Corea or The Rippingtons. John M is definitely a man of great taste. If you’ve noticed during his program, he cleverly blends his playlist with Top 40 pop hits and smooth modern jazz tracks that is very unique and one of a kind. With an impressive radio program, John M certainly has proof that he really knows the tricks to his trade.

He is a veteran to the radio industry, having been in the business for more than 20 years. Martha T, the architect of Y101, christened him with an appropriate nickname, big Kahuna because of his resemblance to a large breaking wave. In Hawaiian lingo kahuna represents a very large wave for surfing. It is also an informal way of calling an important and wise person or a person who is in charge. That’s why the moniker is so fitting for the ever-so-famous, with the ever-so-gigantic name in radio.

Having also trained legendary jocks like Al B Uro, Real Steel, Chad the Stud and Mike Solo, John M’s influence resonated far outside of what he thought he was capable of. His protégés, unsurprisingly, are very thankful to have been under the guidance of the esteemed and charming, John M.

That’s why for his birthday, as a small token of gratitude for his service, I think it’d be really nice to call and greet the inimitable John M on the Afternoon Drive and give him the best weekend he can look forward to!