After an hour of rain in Cebu, several areas in the province were flooded on Friday, July 1.

The heavy downpour of rain that lasted for an hour caused massive flooding and a gridlock across the city. The rain began around 4 pm, and netizens began reporting flooded areas around 5 pm. Waist-deep floods were reported on AS Fortuna Avenue in Mandaue City. Netizens also reported flooding in Banilad, around the Ayala Center, and Pope John Paul Avenue II in Cebu City around 5 pm. The floods triggered vehicular gridlock in several intersections, including AS Fortuna Avenue and the Lopez Jaena Highway in Mandaue City, and Governor Cuenco Avenue in Banilad, Cebu City. This caused motorists and commuters to be stranded for several hours. The flooding and traffic congestion subsided after midnight. 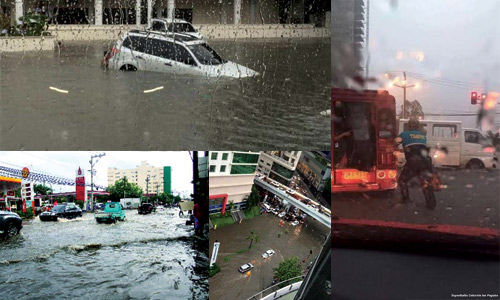 Back in the 80’s and 90’s the word flood was unheard of here in Cebu. However flooding was already discussed in our social studies subjects in school. We were taught that if we continue to cut trees in the mountains, continue to throw garbage anywhere, and over populate ourselves then flooding may likely happen. I guess none of us learned from that. Aside from what was foretold we are discovering now that our natural water ways and catch basins are being tampered so in effect water is prevented from flowing on its natural cause. Progress as we know it is not really beneficial in the long run. All of this is coming at us and it is only just beginning.

I said this before and I am saying it again, A strong government policy in order to prevent massive flooding and the political will to enforce this is needed. The business sector who is one of the major causes should commit to better improving our waterways and sacrifice their business interest for the betterment of our society. Anyway they should realize by now that if these flooding continue there will be no business for them. Last but not the least all of us should contribute in our own little way in preventive measures to avoid flooding. We can help educate and become an example for the rest can learn and see the right thing to do. We are all in this together. There is no other way but to work together.

Credit to all owners of the photos