John M’s a cynic when it comes to crappy songs made by talentless “artists”.

In a world of capitalism and commercialism in music, our radio host found only two pop artists whose sound he found original and unique and could very well save the industry. 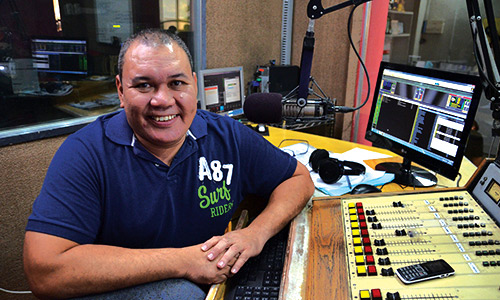 There are two things you need to know about John M right off the bat; he is obsessed about his music and he cruelly despises the 21st century Vanilla Ice of a musician that is Justin Bieber. Those are his own words, not mine.

John M may play his hits on the radio but he totally hates the 22 year old Sorry singer and his uncircumcised head. If people would define the music of the 2010’s with his music, then John M will feel very sorry for you. There are only two acts he considers great in today’s music industry; The 1975 and Twenty One Pilots.

If you’ve read my Artist of the Week article about The 1975 then you’d remember I called them a “post-modern pop band”, a band who makes pop music but doesn’t really want to be labeled as so. John M thinks they’re great. He says that they deliver a different musical feel and that they have their own style unique from most of the Top 40 hits on the charts right now.

“If you’re going to take the sound of the 80’s and do it tastefully, then The 1975 is the band who’ve achieved that”

John explains that The 1975 successfully emulates the sound of the 80s without overdoing it while at the same time incorporating some modern twists. This Must Be My Dream is one of John M’s favorite, noting the unique guitar mix that reminds him of the decade that he once grew up with.

Twenty One Pilots, the other distinct band today, is also one of John M’s picks. It’s the duo’s unique ability to blend other genres in their music and the fact that these Ohio teenagers can make pretty good music at a young age is what makes John M have this special sonic interest in them.

“What their parents were listening to back then actually influenced these young musician’s sound. That’s why their music is unique in today’s Top 40s”

Catch John M every Mondays to Fridays 2:00pm to 6:00pm on the Afternoon Drive. Only here at Y101, Always First.