After President Rodrigo Duterte won as President in last May 2016 elections I noticed several vehicles using the DU-30 plates.

It took me back in the 90’s when Erap became president, several Erap plates were also used by some people. These Erap plates somehow made a statement that the owner of the vehicle was connected to Erap thus making him or her important. It was considered a power trip on the road. This is also how others feel on the Protocol plates of the Congressmen. 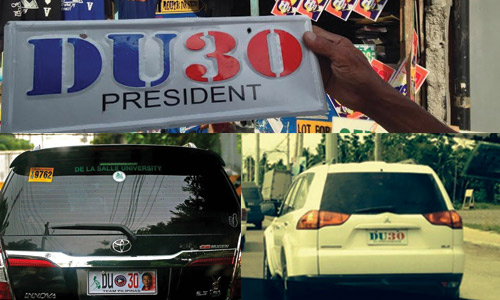 When I saw the DU-30 plates on the road right after elections it made me wonder. I know for a fact that President Rodrigo Duterte would hate it very much if his name was dropped to pursue personal interest how much more if his name was used to demonstrate power over the rest on the road. I am not saying that all DU-30 plate users have this intention. Maybe they are just carried away by the election fever and that they want the Duterte name stamped in everything, I don’t know but election is over. I think you guys must realize that by sporting the Duterte plate in your vehicle you are not helping with the President's commitment on change.

This morning, The Inquirer reported that Malacañang on Sunday warned motorists from attaching “Duterte plates” to their vehicles to flout traffic rules as it called on the public to be vigilant against abusive vehicle owners. Presidential Communications Secretary Martin Andanar said President Duterte would not tolerate motorists using licensed plates emblazoned with the President’s name to avoid being flagged down for traffic rules violation.

“The President has always been for equality, fairness and justice,” Andanar told government-owned dzRB radio. “If you have reports or personally saw abusive motorists using Duterte plates, you can (contact) the Presidential Communications Office and I will make sure the President finds out,” he said. I am glad the office of the President caught up on this immediately. If we really want change it has to start on little indicators like this.