To the guy who’s got everything; You are even more special to have that golden heart. Don’t lose it. Happy birthday! – John M 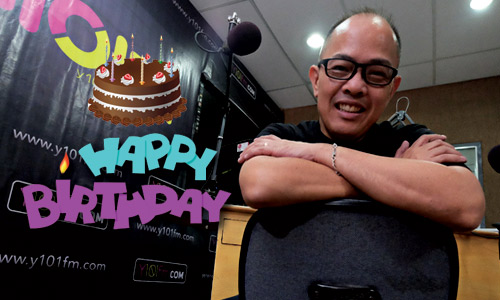 Icky is someone with a wide and diverse musical influence. From what I’ve heard, he’s the type of person who can rock out to loud music, dance around to pop, and chill with jazz and hip-hop. Icky is a man with an eclectic taste.

Aside from being a cool jockey, Icky is also a well-known successful businessman. He runs a business operation in Bantayan Island and a different type of business in the heart of our Province. Icky is a man of passion when it comes to his jobs. Even with a lot of successful projects in his hands, he’d still go back to falling in love with his first passion; which is music. I’ve heard that he can be a slave for music, wanting to work for the radio even without getting paid. That is how much Icky is obsessed about music and it really tells how much he simply loves the radio.

John M from the Afternoon Drive revealed to me that Icky has always wanted to be part of the Rhythm Crew back in the 90’s. Even when he was jockeying at a different radio station in Cebu, his heart was longing for Y101. A decade later, Icky finally got his stint at the best CHR station in Cebu and he was more than happy ever since.

Icky is undoubtedly one of the coolest jocks Y101 will always cherish. So on behalf of the whole Rhythm Crew and the employees of Y101, happy birthday Icky!