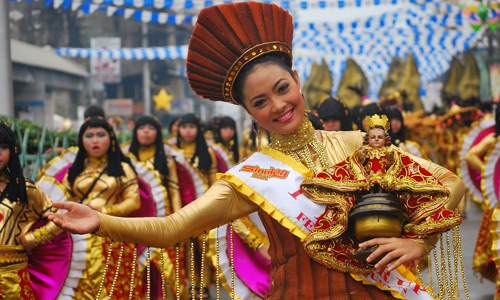 It’s the most awaited festival of the Cebuanos!

I bet most of the people are preparing for it now that Christmas and New Year is over.

Sinulog is an annual cultural and religious festival held on the third Sunday of January and is the eye of the Sto. Niño celebration in the Philippines.  The Sinulog Festival recalls the time when Filipinos rejected their beliefs in animism and accepted Christianity. Why the dance? History says that Ferdinand Magellan presented the image of baby Jesus (Sto. Niño) to Hara Amihan , Rajah Humabon’s wife as a baptismal gift where she danced with joy upon receiving it. The natives then followed her dancing and this was regarded as the first Sinulog.

People have mixed feelings for this celebration. Majority are excited for it while others do not like it as many people use this grand celebration as a reason to get drunk on the streets. Traffic is also a major concern, especially to the people who need to get out of their houses to work.

What do the people of Y101 FM feel about Sinulog? Stay tuned for the next Y101 Talks!