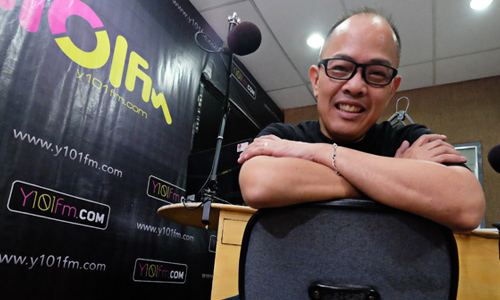 Everyone has their own Christmas wish, and Icky is no different.

Since I do not get to see the guy, I decided to leave him a message while he was at the airport waiting for a delayed flight. I asked him some questions and he gladly answered them.

Icky loves preparing for Christmas. He loves to choose and buy gifts that suit the person to be given. He further says that he is for practicality over fad and fashion which makes him prefer choosing and giving gifts that the recipient can use for a long time. I agree with Icky. Fashion changes a lot and one cannot use it when it’s out of date, just like the expensive androids. People want an android but they usually have a back-up basic phone, and it’s the basic phone that lasts them for a lot of years.

Icky states that he does not have any cause this year rather, he focused on giving time to his kids as he is always out of town for work. He aims to (finally) diet and exercise because it is worth the sacrifice in exchange for good health. He also shared that he wants more disciplined private / PUJ drivers and more pedestrians in Metro Cebu. He explained that Cebu traffic has gotten so bad; it’s not worth driving around during rush hour. Finally, Icky wishes for lesser violent typhoons this 2015 since all of us had enough of them the past few years. "There is too much death and destruction already," he wrote.