Keep warm with Chad the Stud and catch him on the Midday Vibe every Mondays to Fridays 10am-2pm.

For months on end we here at the City of Cebu had suffered excruciating heat caused by the El Niño phenomenon. We didn’t dare to go outside during the mid day because the heat was too painful on the skin and we feared the sun might broil us to death. But Chad the Stud of the Midday Vibe was there to provide us the breeze needed. Chad had a way on keeping our heads cool. And now that it’s the rainy season Chad the Stud has some advice for us to surviving another weather change. 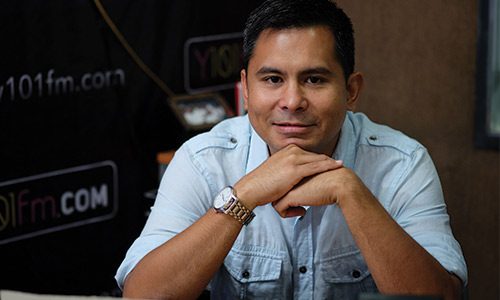 Starting a few weeks ago, we the people at Southside finally got to see water fall down from the sky. Every few days, we started to experience rain pouring down from above and before we know it the cold will overwhelm us. It’s the rainy season now and another set of problems will arise like flooding and storms. But what the rainy season generally brings is the cold.

Some people are not used to the chills that the rainy season brings. Some might stay at home to try and cozy up while the morning skies outside turns dark and rain falls down. But some people embrace it. Other people will run outside to play in the rain and some would even take the opportunity to have a cool and breezy nap. One of those people who’d certainly loves to burrow in his bed is Chad!

Chad the Stud likes the cold and he likes sleeping while tucked under a blanket when it’s really really cool. He’d put on some music fit for the weather like Bump and Grind by R. Kelly. Chad the Stud is obviously an expert on how to spend a cold day inside the house while rain pours hard outside.

The rainy season runs for several months so you better follow Chad the Stud’s advice on how to have a great time. Prepare some hot choco and good music and remember Chad’s advice; “Have someone to hug, hold, embrace, and cuddle with”.

Nothing will go wrong if you believe in the words of Chad the Stud, the on-air playboy who can keep you cool on a hot day, and keep you warm on a cold night.