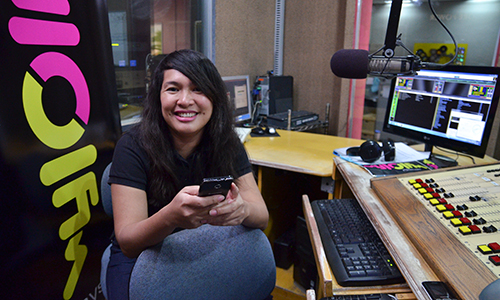 Jeane Louise is up for this week’s Y101 Talks. Getting up close and personal being our goal, maybe we’ll get her to uncover a few juicy secrets. The woman behind Midday Drive spills the beans on her musical preferences now and growing up.

Right off the bat, Jeane Louise, like so many music lovers out there, has no certain preference in music or music artists. She listens to all types of music, appreciates their diversity and what they brought to the table, making music what it is now. So, if she’s not gonna bite on that one, I asked her what was the first album she ever bought with her own cash. Her answer might surprise you.

Lea Salonga’s Miss Saigon Album. Even that caught me off-guard. Classy, yet unexpected. Could she have been a frustrated theater artist back in the day? She’s not telling. For what it’s worth, some people could have chosen worse.

All the other albums prior were purchased by her father, who was also a radio jock and Jeane’s biggest musical influence, leading her to pursue a career in radio as well.

But before radio, did you guys know she worked in the Maldives? For two years she worked in guest relations and she explained how living there, its beautiful sunsets and decadent wines made you feel like nothing could go wrong. A well-travelled woman, taking radio and the world by storm.

Catch Jeane Louise on “Midday Vibes”, from 10 AM to 2 PM. From the station that gives you the very best, Y101, always first.