Our favorite morning radio show host spent his weekend travelling the south side of Southside where he rediscovered the simple life.

Over the weekend, Jiggy Jr sported a pair of shades and a cool black Beatles shirt and travelled to his dad’s hometown in Pinamungahan before continuing down the road to Barili where his mom used to grow up. 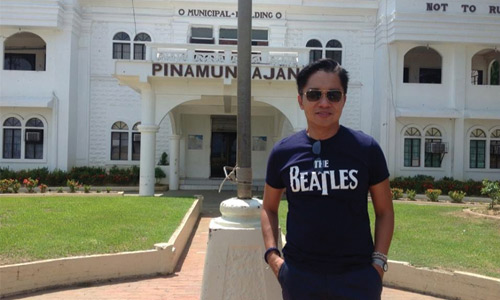 “I had a fun filled weekend. I went to my parents’ hometowns which is very norturing for the soul”, the master at Jiggy in the Morning said.

“We were on a nostaligc trip. We went to Daquit, Barili where my mom spent most of her childhood. We looked at our 15-hectare property by the national road in Barili, an inheritance of my mom’s and we’re selling it. I feel so sad that we’re selling it because I think it’s such a beautiful lot. A piece of paradise with so many beautiful acacia trees”.

Jiggy might have been saddened about learning their land is being auctioned off, (which by the way is still up for sale if you’re planning to check on it) however, his melancholy might have also stirred up from noticing how the simple life in the provinces is becoming urbanized.

“It’s just sad that so much of development and progress have already diluted the simple life now. Progress in the province is a good thing, but sometimes we have to look back and ask “what is progress?” Is having more roads and taller buildings a progress to having a good life? Or is it being able to commune with nature, or breathe fresh air and walk on soil? I think that’s the good life too. It’s not just about infrastructure and urbanization”.

In spite of that, Jiggy Jr had a great time during the weekend, spending the time with the most important people in his life, his family.

Catch the master Jiggy Jr on his morning show Jiggy in the Morning every Mondays to Fridays 6am to 10am. Only here at Y101, the soundtrack of your summer.

Pics of Jiggy’s land that is for sale.