Chad the Stud talks about Real Madrid, Game of Thrones, and Justin Timberlake.

Over the weekend, Real Madrid fans felt very animated as they witnessed the historic victory of their favorite football club. One of those happy fans were our very own Chad the Stud. His weekend felt really great when Real Madrid won their 11th UEFA champions league title. You can only imagine how our Midday Vibe host felt when he saw Christiano Ronaldo put the ball on the spot and lashed the fifth out of five for Real Madrid to claim the victory against Atletico Spain after 120 minutes of football. 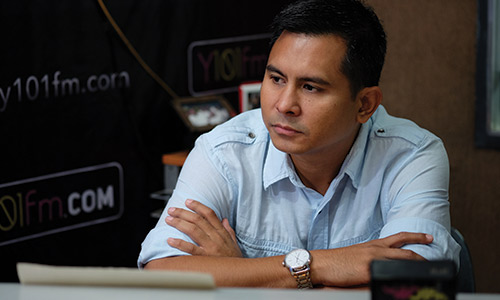 As Chad the Stud was celebrating the victory of his football team, his children might as well been feeling terrified at the fates of their favorite TV characters, whom they were still about to find out over the weekend. Chad had mentioned before how his children like watching the fantasy series Game of Thrones. His older kids, aged 25 and 23, used to watch the impactful TV show with their radio dad. Chad, however, fell out from watching the series after season one.

“At first I liked it cos I thought it was realistic, but when the dragons came out I stopped watching”.

Well to be fair, TV Game of Thrones fans were also surprised when they were introduced with fantasy elements over the seasons. Especially when the non-book readers were shown the concepts of warging, and white walkers, and quite recently time travel! While Chad the Stud might not be a fan of the biggest thing in TV right now, he undoubtedly adores the biggest thing in music right now.

At the moment, Chad the Stud is loving Justin Timberlake’s comeback. JT released the summer song Can’t Stop the Feeling for the upcoming animated movie Trolls. After telling Chad that people are already calling the song the summer hit of the year, he was one not to jump too quickly in the assumption.

“[American] Summer is still starting, so we don’t know yet. Probably there might be another song that will come out mid-summer”.

People have also cited similarities between JT’s new song to 2014’s Happy by Pharrell Williams. Both are songs that are made for a children’s movie and has a really cheerful message. Why, the music videos of the songs are similar as well. When I asked Chad the Stud to compare the two songs, he really couldn’t decide which one is better.

“I can’t really compare Feeling too Happy because they are different. Both songs are actually good. It’s hard to choose”.

So don’t forget to catch Chad the Stud and the new Justin Timberlake hit on his show Midday Vibe every Monday to Friday, 10am-2pm. Only here at Y101, the soundtrack of your summer.