John M talks about the chord bimbos and the music that he likes.

A few weeks ago, I wrote an article called Is Rock and Roll Dead? where I talked about how rock music is significantly absent in the charts this decade. John M told me he agrees. The pure rock sound enjoying a success in the mainstream is rare to find these days. But rock and roll is still there, the Afternoon Drive host told me, “rock music is still there, but it’s just the watered down types”. 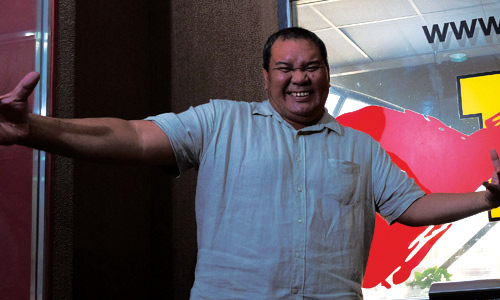 “Rock never died it got commercialized by these 3 chord bimbos. You simply can’t kill the human soul.”

When you create music, you build it from a combination of notes and chords that you hope would produce a beautiful sound. There are major chords, and there are sadder sounding ones like the minor chords. The three chord bimbos that John M was talking about are Amaj, Cmaj, and Dmaj; the three main chords commercial music use today to sell songs. “Put danceable beats to the chords, put it on loop, and maybe add a rap to it, then you have a what you call a hit song”.

You got to admit, formulaic music can sometimes become annoying. These pop songs are systematically built to crawl into your mind and feed your earworm. They are meant to be really catchy so that they can sell well and the listening market will purchase the songs.

“All the chords are redundant, they put it on loop. I look at a song on its musical content and on how they go about it. I’m all about musicianship. I like people who express themselves through music and put their hearts into it.”, John M says.

That’s why our favorite afternoon host praises The Beatles whose music are still being listened today even after 50 years. John M explains that the Beatles made music using the three chord bimbos, however their passion in making music is clearly heard. Their contents of the songs moved beyond from just simple cute love songs to songs about fixing a hole and Mr. Kite’s crazy circus show.

“i like musicians who are well trained, who took a long long time to master music. Even the people who are on top now are still practicing, still trying to look for new sounds. That’s why I hate it when a song is a commercial success and the musician didn’t put passion to it”.

John M certainly is a guy whose love for music defines who he is. His intelligent discourse on the topic is a must-catch for every music enthusiast who's got spare time to chat. So join John M on the Afternoon Drive every 2pm to 6pm. Only here at y101, the soundtrack of your summer.