There was mixed feelings all through out the country when Presumptive President Duterte announced his prospected cabinet appointments.

In particular, those offered to the National Democratic Front, the Communist Party of the Philippines and other left-leaning groups. Mayor Duterte has offered four Cabinet positions to the NDF, namely the Departments of Agrarian Reform, Environment and Natural Resources, Social Welfare and Development, and Labor and Employment. 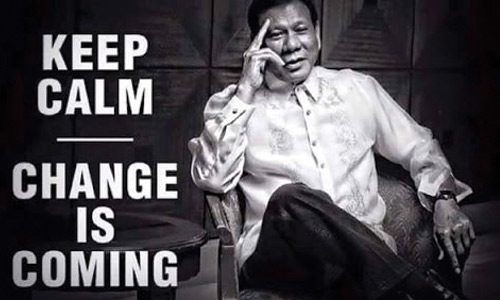 A lot of people, however, are wary, remembering the time when the late president Cory Aquino released a lot of political prisoners trying to reach out. History proved that did not really end the insurgency, but only strengthened the armed New People’s Army that reached its peak of 25,000 armed guerillas during the term of Mrs. Aquino. The Communist was literally knocking on our doors; their armed wing came down from the mountains and launched offensives against Government forces on the streets of our cities. The Labor organizations were already infiltrated and were in shambles.

I am not saying that this is the fate that awaits us. I am also not saying that the communist ideology is a bad thing. Although it sure is not a usual. I have never heard of any President from Marcos to the present that offered a few seats in government to the communist. This is something unexpected of a president to do in a democratic state where he will have to swear to protect this country from enemies both foreign and domestic. We don’t need an analyst to tell us that this plan of Duterte is simply dangerous and will greatly affect our security and economy. I am dumbfounded by this announcement. It is either that Duterte has a big brilliant plan by offering a few slots in government to the communist or he doesn’t know what he is doing at all. Let us hope it is the former.