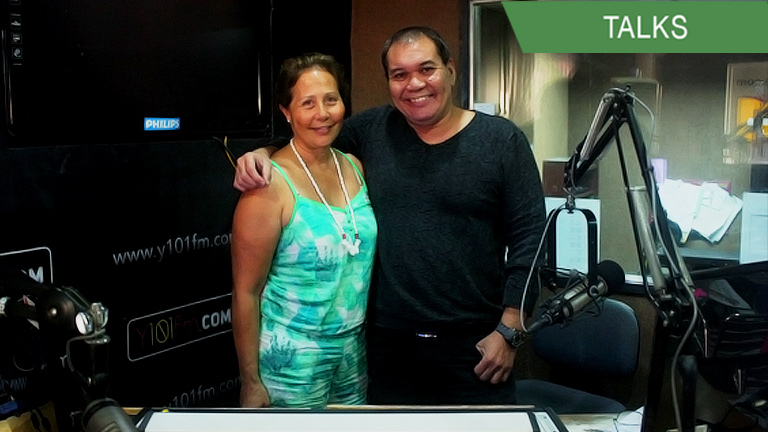 Here’s an inside scoop of what Cure founding member Lol Tolhurst is up to since being ejected from the band in 1988.

John M had two separate guests on last Thursday’s episode of The Afternoon Drive. Before he talked with Metal Muffins, the all-female rockers set to perform on Bootleg Gold Live V, the big kahuna had the privilege of chatting with Cindy Levinson, the music/life partner of Lol Tolhurst, co-founder/drummer/keyboardist of Bootleg Gold’s favorite band, The Cure.

Mrs. Cindy Levinson-Tolhurst was briefly in the Philippines last week to attend a wedding. It was her first time coming back to the country since she was just a little babe. She was born up in Manila to an Ilonga mother during the 60's, making her "practically a Filipina by right". On John M's show, Cindy shared her joy at having the chance to eat Filipino food again during the wedding. As she said, it was a cuisine she fondly remembers from her childhood. She had pancit, lumpia, and lechon, the very same food she enjoyed eating while growing up. Now what could be better than that?

Well, you could at the same time be married to a rock star as well! And not just to any regular rocker, maybe even a member and co-founder of one of the most important bands in pop music history. Because she's a very lucky lumpia-loving Filipina, being married to a rock star was exactly what happened to Cindy Levinson. She has been bound to Lol Tolhurst for more than 20 years now. Cindy was working as a hairdresser in Hollywood when she first met Lol, who was then in a bad period having been fired from the Cure three years prior. One of Cindy’s close clients was a friend of Lol’s and told him how wonderful Cindy was and that he should meet her. Ultimately they met and to quote Cindy, “the stars aligned, and I found my soulmate”.

Cindy and Lol got married and since then became really happy sharing a family and making music together. In 2002, the couple formed a band called Levinhurst after Lol found out that Cindy was an amazing singer. "He heard me singing in the house, and he was just like, "let's start a band together", Cindy recalls. So they started writing and recording music and managed to earn moderate success, releasing at least three albums from 2004 to 2009. Right now Cindy and Lol are working on new material that they hope to turn into an album and finish some time this year.

Elsewhere during John M’s interview, Cindy mentioned that her husband recently published his autobiography, “Cured: The Tale of Two Imaginary Boys”. As you can imagine, the memoir is about Lol’s relationship with famed frontman and childhood friend Robert Smith and contain vignettes he had with the Cure, particularly his struggles with alcoholism that led to his disintegration from the band. The book also includes stories of multiple blackouts, break-ups and how Lol managed to escape the 80’s alive. As John M pointed out, Cindy is partly responsible for the last one. It was her that helped Lol beat his alcohol problems, making him sober for more than 25 years!

It’s no doubt that John M had a fantastic time chatting with Mrs. Tolhurst on his show. Y101 was privileged to hear several interesting stories about Lol Tolhurst; the man who helped create a band that influenced generations, a band whose music soundtrack countless teenagers’ lives. The Cure is a band that really matters.

If you wanna catch more exclusive interviews, especially the ones coming from the wives of your favorite musicians, then tune in to Y101’s Afternoon Drive (2:00pm to 6:00pm). Only here on the rhythm of the city,Y101, Always First.