Like every other millennial, All Night Live’s Tee is still trying to find herself and wanting to make good in life as early as possible.

This dilemma has been plaguing us millennials especially when we’re at that point in life where responsibility is already rocketing towards us. As a millennial myself, I believe we’re in that awkward phase in life when we have to transition ourselves from being care-free and worry-free individuals to becoming responsible independent adults. Tee however has always been craving for change. She wanted to do things she hasn’t done before and she wanted to do it alone. That’s why she is now a host of a late night radio show at the best radio station in Cebu, Y101. 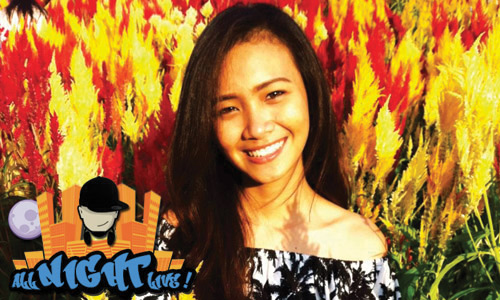 Tee and I talked about music on Facebook. I learned that her dad used to play CD’s when she was younger which is how she got exposed to older music. She was able to appreciate the music of The Corrs, ABBA, and even The Beatles when she was growing up. She even mentioned that her grandfather has an impressive collection of vinyl records displayed in their shelf and that they still own a working turntable. Growing up in a musical home made her love music very much.

“I think loving music was meant for people I guess. The first time you hear a certain melody and it sticks to you.”

Tee’s biggest music influence is the enigmatic Melanie Martinez. When asked why she was so, Tee explained,” Well, in her lyrics she speaks of truth about society. But it’s masked by the melody and tune. She plays instruments, writes her own songs, directs her music vid and she has a distinct voice. Her style is different. She also has an “IDGAF (I don’t give a fcuk” attitude which I love about her. She's still young and she's done a lot”

Tee certainly proved herself to being a feisty woman who was able to nab a job at a young age without anybody’s help. Since Tee has just recently started in the game, she looks forward to what lies ahead in the future.

Catch Tee every 10pm-12am after Carlow at the second half of All Night Live.