“I think clustered together as a crowd, the Philippines came up with the smartest outcome possible.”

As usual the Jiggymeister is feeling awesome. He told me he has already taken his 5th cup of coffee this morning. Drinking large amounts of coffee is what keeps himself wired. He claims that it’s important to have a rush of blood in your brain so you’ll be quick to think. It’s crucial for any job that requires some form of critical thinking. Jiggy Jr has the responsibility to keep everyone up and make the slickest remarks every morning. That’s why several cups of coffee are important! 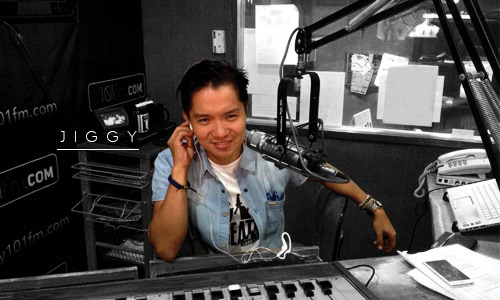 The elections are over but it’s still pretty hot. Rody Duterte is winning the presidential race and Jiggy Jr knows why. A few weeks ago, our morning show host read a book called The Wisdom of Crowds: Why the Many are Smarter Than the Few and How Collective Wisdom Shapes Business, Economies, Societies, and Nations written by American journalist James Surowiecki. The long title concisely explains the content of the book; how a group of people, in this case, a population, is smarter than its individual parts.

Jiggy Jr thinks that the front runners of the elections is a classic example of a wisdom of crowds. “A lot of people had their own individual opinion, but i think clustered together as a crowd, the Philippines came up with the smartest outcome possible. It’s a pretty smart choice.. But yet it still yet to be seen what the outcome would be.”

Whatever the collective Filipino people chose is the best choice according to the wisdom of crowds. According to the thesis in the book, a diverse collection of independently deciding individuals is likely to make certain types of decisions and predictions better than individuals or even experts.

For Jiggy Jr, there’s no telling yet where the future is going. He believes that Rody Duterte is a very interesting character and he thinks that it will be a very exciting six years while he is still around. Digong’s term will be full of surprises and as a colorful character that he is, Jiggy thinks that his presidency will be full of funny and clever moments.

“With the people behind him, hopefully he will be able to inspire support and he will galvanize all the differences of this nation and pull them together to make this country a better place. This presidency would either take us to the next level or take us back to the dark ages. There is no middle ground to this presidency. I think it would either be heaven or hell”.