For those who are in doubt, you just have to be really positive.

The 2016 elections are over and the partial tally results seem to show who the most obvious winner will be. We better get used to calling Mayor Duterte as President Rody later on as he leads himself to victory. When the official results are announced, the Philippine Republic will finally get its 16th president and the country will probably have a significant change. 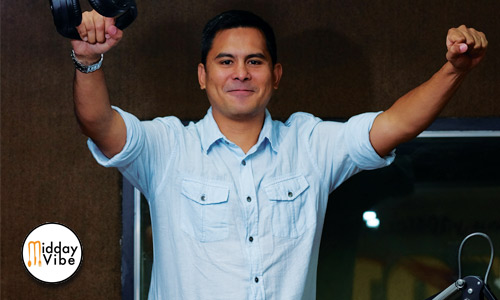 The host for the Midday Vibe, Chad the Stud, is happy with the results. Although he doesn’t know, and honestly none of us really do, if Duterte’s eventual presidency will have a great effect on our lives and in our country. Chad is very hopeful of Duterte’s term. The anti-crime leader will finally get to stay at the Malacañang Palace and will be sworn into office somewhere in June or July this year.

“I think everyone now should be positive and not bring down anyone right now. According to Duterte, the time has come for reaching out to each other.”

I asked Chad what his plans will be for the next six years and joked if he was going to plan on opening a funeral home business. He told me that he honestly doesn’t have any idea yet where things will go.

And as for the people who are doubtful of Duterte’s term for president, Chad’s message was clear. “People are saying things about how freedom of speech will be gone etc.. but you know what, how sure are they? It’s not happened yet.. so lets just be positive”.