How John M Interviews a Celebrity

It has been such a busy week for John M shuffling back and forth for interviews after interviews.

If you’ve ever wondered how this afternoon jock manages to keep a conversation smooth and lively despite having to be overloaded with a lot of it, this is how he does it. 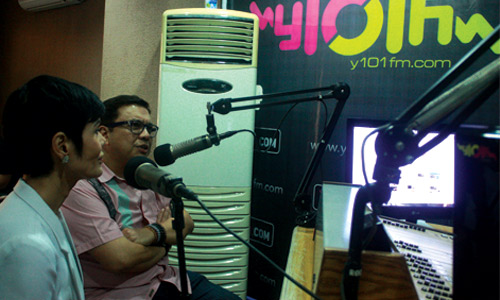 John M has been professionally interviewing countless people for more than 20 years. Just last week, he effortlessly talked with famous doctors and boxers on his afternoon radio show Afternoon Drive. The Calayan doctors, famous for their plastic surgery on big name celebrities from Manila, gave a visit to Y101 where John and they talked about skin care, moles, and vaginoplasty! John was also given a visit by Dr. Eric Yalung, an associate of the Calayans, and the radio host and doctor talked about the latter’s work on Regenestem. On top of those, he was also knocked out by interviews he had to make with Omega Gym boxers Christian Araneta and Kenny Demecillo, whose fights in the ring I assume is as brutal and strenuous as interviewing big shot celebrities in a daily basis.

For me it’s a terrifyingly daunting task to do, trying to talk with highly respected celebrities, keeping the conversation going and focusing on it, while a myriad of distractions appear to sabotage the interview. So at the end of the week, it was my turn to interview the interviewer, and having been impressed of how effortlessly John M handles his interviews, I asked him for some tips to do my job better.

“The secret to a successful interview is you let the interviewee talk about anything he has to offer. You should always remember that the interview is not about you, it’s about the person you’re interviewing. For me, I just find interest in what they do or say. I try to keep myself interested as much as possible.” Said John.

He also admitted that sometimes he finds it difficult when he tries to interview people and the phone keeps ringing and texts keep coming. He revealed to me that one of the ways he can remedy those distractions is by using humor. John M says that humor always comes in handy, especially when the people you are interviewing are quiet, shy, or just refuse to talk.

“It’s a challenge, but you need to really pry them. I interviewed rock bands before who refuse to talk. They just nod and answer briefly. When they do that, it's gonna be a short interview.. and so that's where humor comes in.”

John M has interviewed countless celebrities both local and international. He talked with famous singers like Sharon Cuneta and Martin Nievera, politicians like Leni Robredo and Grace Poe, athletes like Nonito Donaire, TV personalities like Jasmine Curtis-Smith and even the U.S. Ambassador to the Philippines Kristie Kenney.

If you think that was impressive, he also managed to interview foreign musicians like Mike Francis, Bobby Kimball from Toto, the band Chicago, Rick Springfield and Sheryl Crow. The most memorable interview he had was with the late comedian Elizabeth Ramsey,

“It was a very interesting interview. My talk with the great Elizabeth Ramsey was so memorable as such that she would throw you off, and totally dominate the interview. She ended up interviewing me!

John M says that he finds all the people he interviews very interesting. “I put my heart into their interests because it gives me an insight of who they are.”

Join John M every Mondays to Fridays on the Afternoon Drive 2pm to 6pm. Only here at the rhythm of the the city, Y101, Always First.