I never quite expected how exciting it would to be sitting on the ringside.

Watching through the television, I wouldn’t imagine how tense the ringside was at times. Every time the boxer takes a rest on the corner, his team would rush in very quick like an F1 pit crew. They’d scramble up the ring bringing with them petroleum jelly, towels, water bottles, and a chair for the fighter to sit on. During the ‘The Time Has Come’ boxing event, I stood directly below the red corner where I got to see things not normally seen on television.

The experience was sensational. Being up close to the ring, I was able to see the magic going on around. Journos took notes, photographers crowd in to take shots, and trainers shouted instructions and compliments to their athlete. VIP guests sat behind us. There was the mayor and his wife, there were movie stars, musicians, big-deal businessmen and other celebrities sitting down on a table behind us media folks and the fighters’ posse. 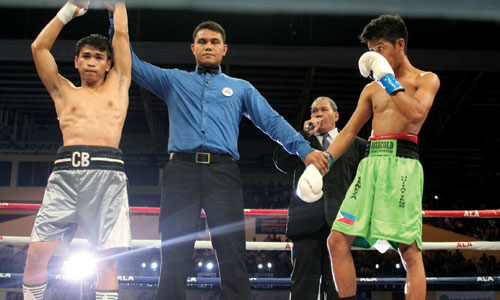 When it was 7:30pm, Jason Pagara fought against Mexican Miguel Zamudio. It was a really exciting fight. It went all through 10 rounds where shortly after it was announced that Pagara won the match unanimously. It was one of those sensational matches that had people off the edge of their seats. The Cagayan De Oro native floored Zamudio around three times. Standing up close to the ring, I was able to see very clearly how Pagara threw a low blow at Zamudio and the Mexican figher mouthed in agony and bent to his knees. 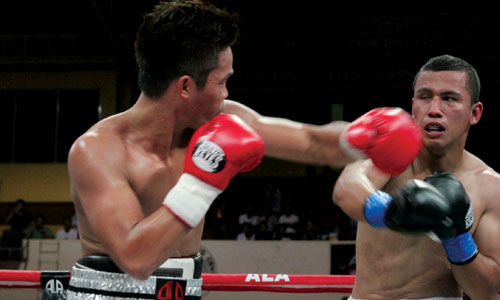 The match that I personally was excited to see that night was the match between Mark “Magnifico” Magsayo and Chris “The Hitman” Avalos. The 20-year old Magsayo was really cocky and I was really anxious to find out if he could defend his confidence or be beaten by the older and more experienced fighter. This match was dubbed The Battle Between a Man and a Kid and just like everybody else, I was there anxiously waiting to find out who’ll get knocked down first. The crowd went nuts during the second round and people started to chant his name. The kid boxer fell down in the third and fourth round, so he started to itch really badly. It got very intense during the sixth round. Magsayo picked up the pieces and rocked his Mexican-American opponent a couple of times. People around me were saying it was the best fight they have ever seen. I had huge doubts in Magsayo and now everyone including me believes he is the next prospect in Filipino boxing. I never really liked Magsayo’s attitude. He was very cocky and very confident to fight against an opponent who has more than 50% bouts than he does. I guess skills really do beat experience. He was able to prove me right and he is now my favorite Filipino boxer around. I think he is the Kanye West in Filipino boxing, and that’s a good thing. 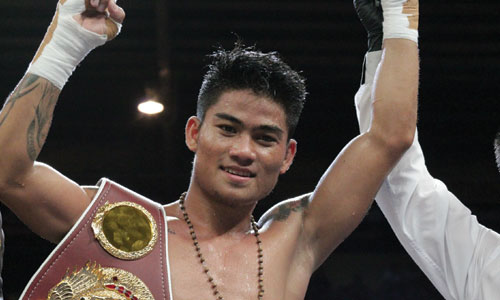 Fighting for the Continental Super-Featherweight Championship, Australia’s Paul Fleming and Mexico’s Miguel Gonzales were next. The crowd was really quiet throughout the match. I was still standing under the red corner padding. The only voices I heard was from the trainers of each opponent. Right next to me was Fleming’s coach, who was throwing out advices to Fleming on the ring. His voice was the most soothing thing you wanted to hear in the ring. If I were his athlete, I would never get intimidated by his constant shouting of instructions at me while I throw punches at my opponent. Fleming’s coach’s voice was a like a massage to the ear. On the other side of the ring though, was a loud vulgar-sounding Mexican coach, who could have thrown out Spanish obscenities at his athlete if I were to know better. It was a great contrast around the ring. It felt so magical and unreal when you get to experience something like that up close. The fighters in the ring are really indeed equally matched, just like what John M thought they would when I interviewed him for Y101 Talks. It was really hard to see who the winner will be. Fleming got knocked down in the 8th round and his mouthpiece almost fell of the edge of the ring in the 10th round, but he was revealed victorious at the end. It was a good fight. Also, I almost got hit by Fleming’s shoe at the end of the 6th round when the Australian fighter slipped down while reaching his chair. It wasn’t bad, it added to a better experience to me. 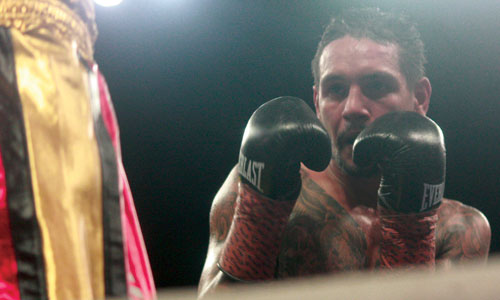 So after all those matches, it came to the main event that everyone was waiting for. Everybody went nuts when Hungarian Zsolt Bedak and Nonito Donaire came on the ring. Immediately right after the singing of the national anthems, the fight went on. It was really intense. I was beside Nonito’s pit crew who wore those “Donaire Team” jackets. On the second round, The Filipino Flash was able to knock down Bedak twice. I really liked Bedak, I felt he would become an underdog who would come out strong in the end. But he called quits in the third round and Donaire won in a technical knockout. People were calling the match sensational but it left me still feeling thirsty. I wanted more of the fight and I thought it was really boring. It was like watching a really good movie where you get really invested into everything and then the tape just frustratingly skips at the end. However, the important thing there was that Donaire was able to defend his WBO World Jr. Featherweight title and won the hearts of all Filipinos. He later called on for a rematch with Guillermo Rigondeaux who defeated Donaire by unanimous decision back in 2013. 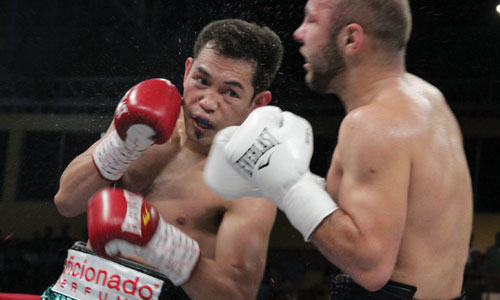 The night was amazing. It was sensational, it was magical especially for me who was there in the ringside to watch his first boxing match live. With the success of the event, Top Rank Promotions will have a reason to promote another fight here in the Boxing Mecca of the Philippines and I can’t wait to be there again to watch a good fight.