“I think Donaire will win by a knock out”

After attending the Donaire vs Bedak press conference held at the Waterfront Hotel, our favorite afternoon John M had finally decided what to expect this upcoming historic event on Saturday. 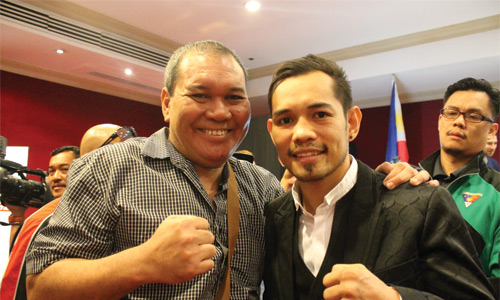 John M is very knowledgeable about boxing. He’s the guy to go to when you want to know about the modern day gladiatorial sport that some people have long compared. John M has followed Donaire’s career for a long time. He has even met the boxer a couple of times and are close acquaintances. The DJ from Afternoon Drive is expecting a knockout win by Donaire this upcoming Saturday. “If the fight goes more than six rounds, Bedak will have a good chance of winning through points”. During the press conference, Donaire expects to knock out Bedak during the fight, while Bedak expects to fight until the 12th round.

Basing on Bedak’s record, the Hungarian boxer couldn’t knock out Donaire. Out of 36 bouts, Bedak has only KO’d his opponents eight times. A very low percentage to vouch against Donaire, John M says. His honest opinion is that Bedak is not there in Donaire’s level. He believes that the Filipino boxer is much more skilled since he have already beaten notable Mexican boxers in the past. He doubts that Bedak will survive the first four rounds.

John M is also excited to see Australia’s Paul “2 Gunz” Fleming fight against Mexico’s Miguel Angel “Ranita” Gonzales this weekend. “If you toss a coin, that’s what this fight will be all about”. He told me that both champions are very talented. “When they say styles make fights, then Fleming and Gonzales belong to each other”.

As for the very young Mark “Magnifico” Magsayo, John M believes that the 20-year old kid lacks experience. The Boholano boxer will fight against the much more experienced 26-year old Mexican-American Chris “The Hitman” Avalos. Avalos has won 26 fights, and knocked out 19 of them. Magsayo on the other hand has only 13 bouts to his record. However, John M says the kid has a chance but he doubts he can beat the more experienced fighter. He thinks that Magsayo is a very exciting fighter and their match this Saturday will be one of the highlights. He says that Magsayo is very good because he fights like a veteran. John M believes that there will definitely be a knockout but he doesn’t know who will throw it and he can’t wait to find out.

The success of the fights this weekend will give Top Rank a great reason to promote their fights again in Cebu, which is considered the boxing Mecca in the Philippines. The Donaire vs Bedak boxing event is the biggest boxing event in Cebu so far. John M witnessed the hype when he was out buying vegetables and fish. He was there when he heard a wife nagging to his husband about how he bought tickets for the fight instead of food.

John M is very excited to watch the fight this Saturday night and his most possible to happen prediction for the event is that he will definitely have a good time.