“Coldplay is one of the very few bands I consider an institution of rock and pop. One of the few bands i have total respect as far as songwriting and musicality is concerned.”

Since the English band is coming to the Philippines some time later in the year, I sat down with Mike O. In his office and asked if he was ready to see Chris Martin and the boys perform in the capital city. It was only fitting to ask him about his opinion on the band since he was already a longtime fan. 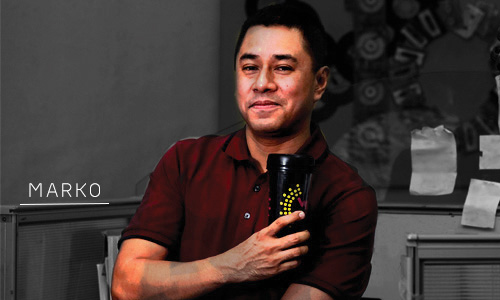 The first time Mike O. heard a Coldplay song was when he was in the island of Bantayan. It was the soundtrack of his summer. The falsetto and expressive vocals of Chris Martin went “look at the stars, see how they shine for you” as Mike O. spent that night on Bantayan with his friends.

Mike O. instantly became a fan of Coldplay although he thought that they were just going to be another British band who imitates the sounds of Oasis or Keane. Mike O. didn’t expect that Coldplay would develop their sound from being just a typical pop and rock act that he thought only came with the new wave of British Invasion of the late 90s and would just be soon forgotten.

“They were able to pull of their change from being that kind of rock band then to a bit of soul and to a bit of pop and electronica.”

Coldplay wasn’t as popular back then. “At that time they were like an indie band for me. I let my friends listen to them and back then I didn’t know if they were just going to be a one hit wonder. That’s the concern always with every band, will it be a one hit wonder or will it continue to evolve?”

The band did however continue to evolve. It became an exciting act that releases critically acclaimed albums every three years. Mike O’s favorite Coldplay album is X&Y (2005). Famous for its electronic influence, X&Y is one of Coldplay’s best and according to Mike O. it was when Coldplay changed their sound. “If you really listen to the old Coldplay, you will find that it’s really sad and melancholic. X&Y was still sad but it started to become more lighthearted and lively already.”

Their latest album A Head Full of Dreams sold 1.9 million copies worldwide and Chris Martin has been stated that it would be their last album. Currently on tour for the promotion of the album, the band plans to perform in Manila for the first time. It will most likely be the first and last Coldplay performance in the Philippines. With this in mind, Mike O. would definitely watch the concert, if he can afford the tickets of course.

“I always tell the younger generation, if you get the chance to watch your favorite artist live, wherever it may be, and if ever you can afford to buy the tickets, then you have to see them. That will be the biggest fulfillment you can have.”

Mike O. believes that it is good to watch a band in its prime. He believes that right now is the perfect moment for them and their career to stop and end with a bang. “Most of the big bands, like even Madonna, passed their prime already. They become too old and less exciting. It’s really good to watch a band in their prime. I think Coldplay is going to be past their prime already because of the new bands coming in. But they’re still there.”

However, he confessed to me that he can’t understand every time Chris Martin speaks. “He’s better off singing. I feel he’s there with one of the few band that when you watch them live, you can empathize with their pain or joy or their mood. That’s very important for me”