When Senator Bongbong Marcos declared that he was running for Presidency it raised eyebrows all over the country.

Vote for him in "Rock The Vote"

The Son of the late President Ferdinand Marcos wants to be elected to the second highest position in our country. Political analysis says that this could be a step for the Marcos family to regain power once more. If Bongbong makes it to the Vice Presidency what is there to stop him from being President in the future? We all know how Bongbong’s father was branded in our history as the dictator that declared martial law in 1972 that trampled the freedom of this country and deprived us from the democratic government that we had. During the famous EDSA revolution in 1986 that toppled the Marcos regime some cried out “never again” but here we are once again, the son of the so called dictator is running. 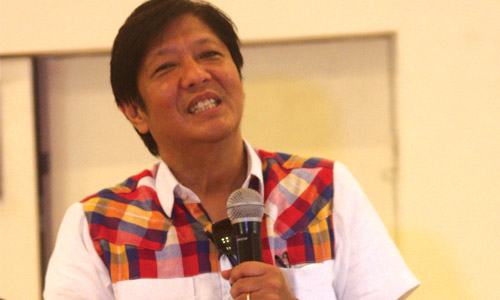 Immediately an effort to remind us of what the Marcos regime did to our country was in motion. With the use of mainstream media and social media was filled with propaganda on why we shouldn’t allow another Marcos to be in a high government position but what is to stop the young Marcos, clearly he is a different person and the younger generation of Filipinos, the one who never experienced what they are talking about and only know about these stories in history books have a different concept in mind. They have established from what they have learned that the Marcos regime has brought more good to this country in infrastructure and other developments compared to the others who came after him. This dwarfs the horror stories of torture and injustice.

Bongbong Marcos has talked about a new concept in government, a more mature and educated way compared to the older days. He has the promise of stronger and dedicated governance compared to those running against him and for this I see the reason why he has the support of the younger generation. This is a strong margin of the voting population, which seems to give him a fighting chance. This is going to be a very interesting election, I am very excited to see if the Marcos name would be vindicated or not.