Tee and Melanie Martinez: Happy on the Dark Side

Tee is the strong-spirited gal behind the mic during the All Night Live every 9pm-12am. Her mission night after night is to accompany all the city night owls and try to make the end of their day cozy as possible. But despite the warm, outgoing, sunshine-inducing nature that she presents on air, Tee holds an interestingly unavoidable fascination on all things morbid and grim. Tee might bring you a metaphorical hug through the radio, but keep your guard up for she might even drag you into an episode of American Horror Story. 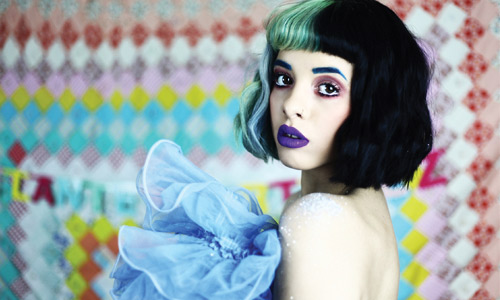 Tee had a tough childhood, so she should feel smugly justified listening to and obsessing with Melanie Martinez, which coincidentally had a song soundtrack American Horror Story. The first time Tee discovered her spirit animal was when she was looking for songs on YouTube back in 2012 when MM was just still a contestant from The Voice.. A year later she heard Dollhouse, a song she found interestingly weird at first. But after several replays and an analysis of the music video and the lyrics, Tee suddenly realized what the song was really about and began to fall in love with it.

Our All Night Live host was captivated by the poetry of Melanie Martinez and her dark eccentric aesthetics. She started listening to more of her songs and found that her music spoke to her deeply in levels you can’t imagine.

“Every family encounters a problem. You may see them happy on the surface but inside, they are torn apart. When you're a little girl, full of innocence, and you don't know what’s happening, it’s sad to know you can’t control what’s going on. With Melanie Martinez’ music, I can relate, and it makes me feel better.”

Different people have different specific musicians they listen to everytime they feel down. Melanie Martinez so happens to be Tee’s. Another few reasons why she loves the 21-year old singer-songwriter is that she’s the whole package. MM is talented; she writes her own songs, she arranges her own music, and she directs the artwork for her own music videos. Tee even admits that if she was to be another person, she would definitely want to be Melanie Martinez.

“I mean, like oh my god have you seen her Insta? Damn”.

Tee would one day like to listen to a collaboration from Mel and Troye Sivan or Twenty One Pilots, adding that they would make “a clash of morbidly beautiful music”.

As more kids nowadays are feeling glum and down, especially those who came from shattered families, Tee just wants you to know that “your storm will subside and you will learn to control them.”

“Embrace it, make it a part of you. And realize that you've conquered this one, so why not conquer every storm that will come. You'll thank your problems later on in life”

Tee concludes, “People of the universe! Those poor souls who are still unaware of Melanie Martinez's existence. Listen to her Cry Baby album then you will be complete!”

Catch Tee every Mondays to Fridays 9pm to 12am on the All Night Live. Only here on the rhythm of the city, Y101, Always First.