Icky Remembers the Music of the Past

Icky is the voice behind your favorite weekend radio shows, the Midday Vibes on Sundays.

Throwing out the freshest and the hottest Top 40 tracks every Saturdays and Sundays, it’s not hard to imagine how Icky loves playing songs. But just like every other jock at Y101, Icky’s music taste is wider than it seems. These are his favorites. 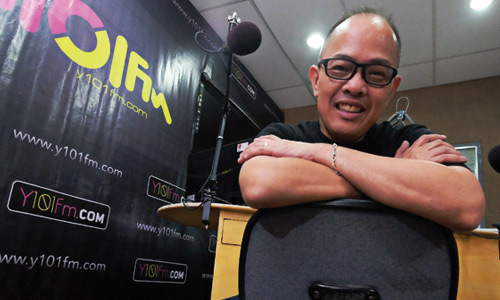 “I mostly listen to top 40’s to keep updated with the new songs. However, there's nothing like the 80's/90's music in the background as you drive or work.”, Icky said, while driving his car on the way to his hometown of Bantayan.

One of Icky’s favorite places to go is to his hometown in Bantayan where he remembers his carefree days filled with lots of boyhood memories soundtracked by the music of his youth. Icky admits that there is something about connecting with the past and associating it with good memories that makes him feel good and be more productive.

“There's something about nostalgia and happy memories that makes one feels good. Not that i'm living in the past but those were the carefree days that I always cherish.”

Icky grew up listening to his favorites; Tears for Fears, Spandau Ballet, and Industry. When he was a teenager, he was very fascinated with music and the radio. He remembers listening to Y101 back then too when it was managed by the legendary Johnny Kawa.

“I realized i loved music when i felt so positive and happy each time i had a new album or cassette tape of a newly discovered song and artist. I listened to music all day long.”

Catch Icky every weekend; Saturday on the Afternoon Drive (2pm-6pm) and Sunday on Midday Vibes (10am-12pm) Only here at Y101, RHYTHM OF THE CITY, Always First.