Buzz of the Day: Drake and Rihanna Get Matching Tattoos 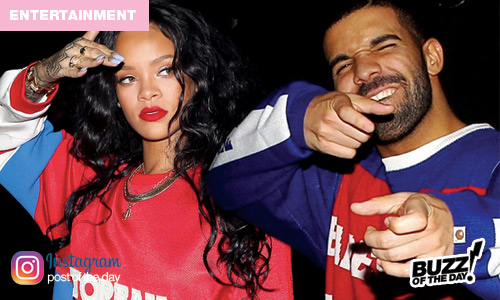 Last week Rihanna got a tattoo dedicated to Drake. Now it appears the rapper has got his own to match his new girlfriend’s.

Drake first confessed his love to Rihanna when he was presenting her an award during the VMA’s a few weeks ago. Since then, the pair has been spotted getting comfy with each other, making public display of affections, and recently getting matching tats.

After Rihanna was seen getting a camouflage shark tattoo, allegedly representing a gift that Drake bought her at an aquarium in Toronto, new photos show that Drake got the same tattoo on his arm.

The Canadian rapper shared a black and white photo of Rih’s new tat on Instagram. A few days later, Drake is spotted with the same tattoo on his arm.

Camo shark for my dear friend @badgalriri Also... I just found out you can zoom on IG- enjoy :)