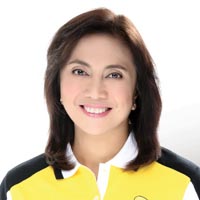 Maria Leonor Gerona Robredo, better known as Leni Robredo, is the widow of the Interior Secretary Jesse Robredo. She is currently serving as Member of the House of Representatives from Camarines Sur's Third District, and is running for the post of Vice President under the Liberal Party.

Gerona was educated in Universidad de Sta. Isabel in Naga city, graduating from Elementary in 1978, and from High School in 1982. She then graduated with a degree in Economics at the University of the Philippines Diliman in 1986. She studied Law at University of Nueva Caceres, passing the bar exam in 1990.

After the People Power Revolution, she began working at the Bicol River Basin Development Program (BRBDP), an agency tasked to undertake integrated area development planning in the three provinces of the Bicol region. In a 2015 interview, she describes her decision:

"My life was all planned before. After graduating, I would go straight to law school and be a lawyer like my father. But I graduated in 1986, just after EDSA, and somehow EDSA changed that."

It was here that she met then-Program Director Jesse Robredo, who would eventually become her husband. The couple was married in 1987 and had three daughters before Jesse's death in a plane crash in 2012.

In 1989, she founded the Lakas ng Kababaihan ng Naga Federation, an organization that provides training and livelihood opportunities for women.

In 2005, Robredo was named the chairperson of the Liberal Party in Camarines Sur, In 2007, Robredo served as the coordinator of Naga City based Sentro ng Alternatibong Lingap Panligan (SALIGAN), which made use of paralegal education and networking to obtain growth and development. Saligan was one of the organizations partnered with Save the Children which aims to help raise children's awareness and involvement in governance. The project aims to spark the inner leaders in the youth.

She ran in Camarines Sur's 3rd congressional district during the Philippine general elections of 2013. On May 16, 2013 she was proclaimed as the winner for the Congressman of the 3rd District of Camarines Sur by a landslide, beating Nelly Favis-Villafuerte, wife of Luis Villafuerte, newspaper columnist of Manila Bulletin, and former Monetary Board member, of Nationalist People's Coalition/United Nationalist Alliance.

Robredo is considered a champion of the Freedom of Information Act, has been a strong supporter of the Bangsamoro Basic Law, and was one of the primary authors of the Tax Incentives Transparency bill. Robredo has said that the burden of paying income tax should be put upon those who can afford it. Robredo initiated the Local Poverty Reduction Action Team (LPRAT) to help alleviate poverty in the Philippines.

Robredo has urged government to continue development programs for the underprivileged. Robredo has stated that Filipinos who are in the marginalized sector should not be denied access to government frontline services and public meetings based on their attire. She has sponsored the House Bill No. 6286,or the Open Door Policy Act. In this act, government offices and agencies will not be able to implement strict dress codes.

Some of the bills Robredo has passed are the following:
• HB 4911: People Empowerment Bill
• This act seeks to create a system of partnership between local governments and civil society organizations through the establishment of a people's council in every local government unit. This act also prescribes the powers and functions of the said council.
• HB 3432: Comprehensive Anti-Discrimination
• This act will prohibit discrimination on the basis of ethnicity, race, religion or belief, sex, gender, sexual orientation, gender identity and expressions, language, disability, HIV status, and other status, and will provide penalties for it.
• HB 4021: Healthy Beverage Options
• This act aims to regulate the availability of beverages to children in schools and for other purposes.
• HB 19: Full Disclosure Policy
• This act will require the full disclosure of all information on fiscal management from all national government departments, bureaus, agencies and other instrumentalities, including government-owned or controlled corporation, and their subsidiaries and local governments. This act will also provide penalties for violations of the said requirement.
• HB 3905: Participatory Budget Process
• This act seeks to institutionalize citizens' participation in the budget process and for other processes.
• HB 3237: Freedom of Information
• This act will strengthen the right of citizens to information held by the government.