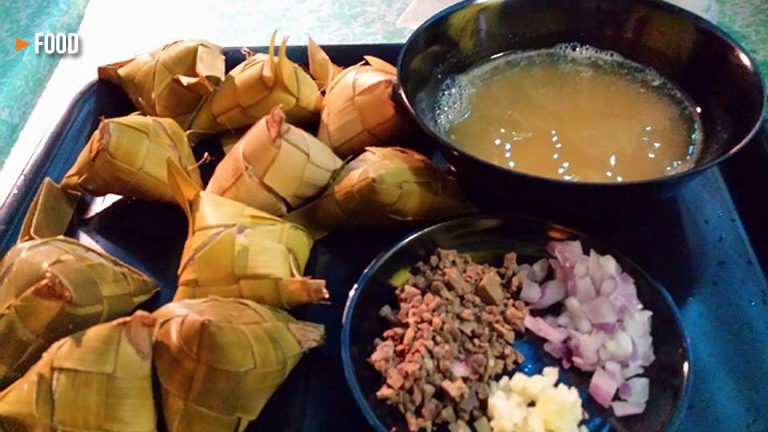 Tuslob buwa (which literally means “to dip into bubbles”), is a street food that works in tandem by dipping puso (or hanging rice) into the hot bubbling sauce made up of pig brain, pork liver or intestines (this may be optional), onions, oil, soy sauce or shrimp paste and other various seasonings.

In recent years, the tuslob buwa became somewhat of a fad. Restaurants like Azul offers its diners the chance to cook their own tuslob buwa in a butane stove and share the food among friends on the table. The original tuslob buwa, which could be found in your neighborhood, would let you share the food with strangers.

The initial concept of the tuslob buwa needs you to buy the puso from the street vendor and dip the puso into his heated wok where the sauce of mixed ingredients are bubbling. You tuslob into the buwa where other people dip their puso as well. This street food would only cost you less than P10.

Nobody knows for sure who invented the idea of the tuslob buwa, but it is commonly accepted that it originated in Barangay Pasil.

Back in 2014, The Freeman talked with 33-year old Diolita Tuan of Barangay Ermita (located just a short distance away from Barangay Pasil), about her tuslob buwa business she said she has been managing for 15 years.

Tuan said she took over the business from her mother Estela who made tuslob buwa in the 1990’s. However, many people believe that tuslob buwa existed even way before that.