Chad the Stud celebrated his Birthday last Monday and I think it’d be nice to surprise him with what his friends from Y101 think of him. This is also a great way to get to know more about our favorite midday DJ. 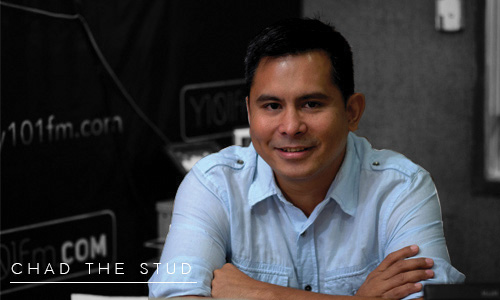 Jack the Whack named Chad the “Stud” because all the girls want to fall in love with the man. If he were a One Directioner, he’d be Zayn Malik. According to Urban dictionary a “stud” is basically a badass, a person who is really cool whom everyone looks up to and wants to get with. A stud is a very charming ladies’ man. And that is exactly what Chad is, or at least that’s what his friends from Y101 told me he is.

K who is the Digital Media Manager of Y101 first met the Stud six months ago. She thought that he was a very shy and quiet kind of person. K had only spoken to a few people around that time and she didn’t really knew Chad that well. It was when K interviewed Chad for Y101 Talks that she found out that the midday DJ was a sporty. Chad the Stud organizes events for football like the Thirsty Cup. It was then that K realized that Chad is a very approachable stud.

K’s message: “Happy birthday Chad! I know you have already accomplished a lot of things in life, but whatever your heart desires now, especially this year, I hope you’ll fulfill more of them...”

Song dedication: “Crazy For You” by Madonna.

(If you listen to Friday Gold Rush, Chad the Stud play a lot of cheesy love songs. The song is cheesy but it has a lot of charm, and that’s exactly what Chad is like also.)

Charito is someone Chad the Stud probably knew since he was 3 years old. The very lovable Charito is the traffic-in-charge of Y101 and the face you meet when you enter the station. Charito had thought of Chad as the young quiet type too when she met him in the 90s, and now Charito thinks Chad is “buang”, or crazy. But joking aside, Charito thinks of him as a very good person and a very friendly guy. She told me that his physical appearance doesn’t change and that he grows younger and younger and that might be because of love. She told me that Chad the Stud is a family man that loves his family dearly.

Our morning DJ from Jiggy in the Morning met Chad more than 10 years ago. Jiggy Jr thought he was a soft spoken guy and that he didn’t even think he was a DJ. He and him would hang out in his house and have a few drinks that’s nothing fancy. Today, Jiggy thinks that Chad has always been the same old Chad the Stud ten years ago. “He’s a stud, and he’ll always be a stud”.

Jiggy’s message: “I hope time doesnt change you and you’d still be the same old Chad the Stud that you are until your last moments”.

Song dedication: “Never Knew Love Like This Before” by Sonia

(Jiggy explains that the song is so Chad the Stud. It’s the kind of sound you associate with the guy. His songs are always female friendly.)

Mike O. met the Stud ten or twenty years ago. His first impression of him was that he was a rich kid, very cool and very sporty. Chad the Stud used to be the program director, he used to do the playlist for Y101 before, and so Chad has become Mike O’s consultant for new songs. Chad would introduce new songs to the playlist and he would predict which songs are going to be hits. “He’s a good consultant and I get to know a lot of things from him and he has a couple of teenagers and a college graduate so he basically knows the younger market.” He described Chad as being the guy who has the ear for popular music. “If I was rock, he’d be pop, if I was indie, he’d be the mainstream”. Being able to know what the latest hits is important when you become a DJ, and Chad the Stud’s eye to find the latest jam is important for Y101.

(Mike remembers when Chad chose that song and asked it to be included in the playlist. “I said Why? It’s just instrumental. There’s no lyrics to it” and he said “Yeah but it’s gonna become popular”... and it did. He always predicts hits especially hits that are gonna be very popular with the girls. That’s Chad”)

In 1996, Chad the Stud was under the training of our afternoon DJ, John M. He jokingly told me that Chad was like a dork. He said he was an easy guy to talk to, very receptive, and very quick to learn. “Chad has always been passionate with his music. Chad is not a rocker but he would know what a good rock song would be. He was always up to date with music. When I trained him together with Mike Solo, Chad was always the guy to go to when it came to who’s doing something new.” Chad the Stud has always looked like a playboy and someone even told me that he was one hell of a lover boy. According to John M, Chad is still a good looking guy whose face doesn’t belong in a prison. He also told me that Chad can probably get any woman he wants but he’s not that type of guy. John M will always remember Chad as the discoverer of new music. He always discover songs with great potentials to be hit and so far he never has failed.

(When John M was training Chad, the song was a potential hit. They were all in agreement to give the song more airtime and so they gave it a chance, and it did become really popular. Chad never fails)