I sat down with Icky to hear his thoughts about politics. I found out that he has a distaste for the traditional way of politics that is still in machinery today.

By tradional way of politics, what Icky meant is when a candidate pretends to be somebody he’s not. He said that they are those politicians who are wooing voters in campaigns but will take advantage of the people once they get elected. Politicians that go around the country to promote themselves but do not have clear plans to improve the condition of the people. 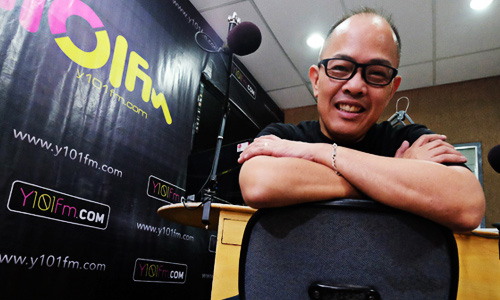 Icky is also annoyed of the fact that the Philippine presidential candidates are spreading lies against each other. Although he added that there are also benefits from hearing of the lies because it gives the public the opportunity to investigate.

“It brings out what has been gathering dust from the coffins. They open up and get the worms out for the people to see if it is real or not. Sometimes you unearth something that is worth listening to or exploring.”

“We have been splinterd off in so many groups. So many different ethncities and social divides have been placed whether on purpose or not. Placed by former administrations to ensure that a group is controlled or whatever” Icky believes that what we need now is unity.

“What if China attacks us tomorrow? Do you think we’re united to defend ourselves? No we’re not becauseos our attitude is alwasys selfish attitude. With unity comes prospriity. That’s why we need a unifying leader.”

Icky believes that we already have a candidate with those qualities mentioned. When I asked if there is a Trump-like presidential candidate running, Icky answered me with yes and no. “We don’t have anyone here like Donal Trump--not as a person, but with the charisma and the charm. Yes. we do have somebody. But they totally differ in different ends of the sphere. In so many ways”.